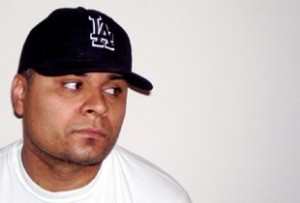 Santiago Salazar aka DJ S2 started deejaying in the early ’90s inspired by mix tapes his brother was bringing back from the Gay underground scene in Los Angeles. His style has always been a mixture of house and techno.
After moving to Detroit, Santiago began his music training with Mike Banks, label founder of Underground Resistance. He mixed and edited several UR releases and remixed the mighty « Return of the Dragons » and DJ Rolando’s « Aguila ».
He released his own tracks under monikers like Aztech Sol and Seldom Seen and became a core member of the Los Hermanos and Galaxy 2 Galaxy live bands, using his DJ skills to control the flow and intensity of the live performances. Alongside long time friend Esteban Adame, Santiago recently formed Ican (short for mexican) and released a bunch of highly acclaimed 12″s both on Carl Craig’s Planet E imprint as well as ICAN productions.

What do you like in L.A. ?
I love the San Gabriel Mountains. I see them everyday.

Your best records shops in L.A. ?
Amoeba is tops as it’s one of the shops that carry a wide variety of music. I also like Exodus Records in Rosemead.

Your best clubs in L.A. ?
I really like El Cid in Silverlake. The sound system is not the best, but they make one of the best ‘Cadillac Margarita’!

Your best parties in L.A. ?
Has to be IN TOO DEEP. One of the few parties that cater to my taste in dance music. Features Reg Xelle as the resident (along with myself). Her parties are known for DEEP UNDERGROUND QUALITY!

Your best bar/pub in L.A. ?
My house is my favorite bar. It’s also the cheapest.

Your best restaurants in L.A. ?
Suehiros in Little Tokyo. DJ Dex first took me here like 11years ago. Taste like a old Japanese grandma’s are cooking the food. Simple dishes and cheap prices make it a favorite for the crew and me.