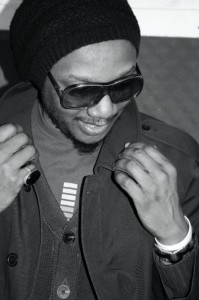 Born into a family of creative artists, Erik began his professional career 10 years ago as a self contained artist/producer on Sony’s Columbia Records after being discovered by American Idol’s Randy Jackson, then V.P. of Columbia Records. Prior to Jackson’s introduction to Erik, he had only briefly been producing, writing and arranging for independent hip hop and soul acts on the east coast. However, after only two years of being immersed in the confinements of corporate music, Erik felt his creativity could be better expressed elsewhere. He broke his contract with Sony, returned east and then to Europe in search of musical freedom.
Eventually, Erik returned to California in pursuit of his musical career as an independent producer/artist where he was tapped to do his first major label production, coupled with various multimedia projects encompassing network and TV shows, feature films for the Showtime network, PBS as well as a two year stint as sounddesigner for famed photographer David LaChapelle and currently with Producit Inc. whose clients include: All major TV & Film networks, international advertising agencies, private events and celebrity clients such as Elton John, Gene Simmons, Mariah Carey and Jessica Alba.

What do you like in SF ?
I LOVE everything that represents the diversity of urban culture and the STRONG sense of African American pride and history that Oakland and the east Bay bring from past to present, there’s an awareness there that CANNOT be lost as time goes on…it’s well rooted in the soil of the area.

Your best records shops in SF ?
My favorite shops in the area wound have to be of course Amoeba and all the swap meet/used book store and thrift stores in the Bay as that’s where you can find hidden and long forgotten treasures that most will simply bypass. I like doing musical research in places where most people wouldn’t think to check for music and or art for that matter.

Your best clubs in SF ?
Oasis, Filmore, The New Parrish, Yoshi’s and on and on and on ! SOOO much musical history and diversity that you really cannot go wrong, if you’re open to just let go and experiment, the trick is to be OPEN as with anywhere…

Your best parties in SF ?
The PEOPLE ! PST in SF, The entire east Bay scene, the promoters, the party people, the cultural movers and shakers that give and KEEP the area’s vibe intact !

Your best bar/pub in SF ?
Well..me not being an alcohol drinker accept for an occasional toast…I’d have to say any small bar/lounge that has a personal chill feel, really good music and atmosphere I can definitely hang out in as I’m not much of a « club » person, the Bay in general has a pretty vast bar/lounge culture and scene so you can always find your fit and fix.

Your best restaurants in SF ?
ALL and any in any given day and night in the area….the Bay is internationally known for it’s restaurant and food culture so once again….it’s all based on your mood at the time as there’s absolutely NO shortage !But to be fair let’s start with Gorilla cafe’ on Telegraph ave. in Berkeley, GREAT good, art and a center for community and organization, a win win !

Your best hotels in SF ?
I actually did dates in the Bay in April and stayed at a GREAT small French hotel located in the heart of Union Station (center of downtown SF.), Although at present I can’t recall the name I would DEFINITELY recommend staying at any of the smaller hotels near the city center as they’re affordable and in walking distance to all the great shopping and restaurants which gives you alot to take in and enjoy !

Some others best places/spots in SF ?
Again..the Bay area, Oakland, Berkeley, SF in particular are easily accessible using the BART train service, very affordable and connected and serve as a great way to get ALL the cultural and musical diversity one could ask for not to mention the GREAT food and shopping ! You really CANNOT go wrong once you spend a little time there and figure out what fits your tastes best ! For me..I can find ALL the things in various degrees for happiness inside and out in the Bay area, everything from urban sprawl to inner city culture to full on nature walks, lots of biking, concrete to green…it’s all there and easily accessible. LOVE for the Bay !!

By the way, I’m currently based in LA and there’s ALOT to love here as well ! Come for a visit and see for yourselves…